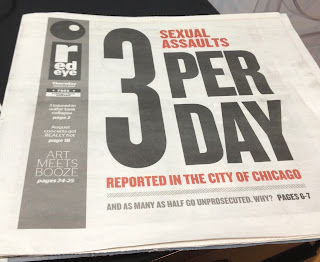 Yesterday, RedEye ran a cover story about our community’s response to sexual assault. The reporter touched on issues victims face when they come forward to report to local law enforcement. Every day, our attorneys at the Chicago Alliance Against Sexual Assault are working with survivors who are seeking to hold perpetrators of rape accountable. Our legal program—the Sexual Assault Justice Project—offers free legal representation to sexual assault survivors as they navigate the criminal justice system or seek remedies against perpetrators in the civil court. We wanted to weigh in about a few things:

Most rapes are not reported, and it takes a lot of courage to come forward and report a rape. The giant numeral 3 on the RedEye cover—the number of sexual assaults reported in Chicago on any given day—does not reflect the true reality of sexual assault in Chicago. Only between 16% and 19% of sexual assaults are ever reported to police. The reporter seems intent upon pointing out that some cases don’t move forward because victims “don’t want to be reminded” of the crime, and “a victim decides not to participate in the investigation.” What she doesn’t mention are the specific, horrifying things that often happen to survivors who do come forward.

The truth is that our culture does not believe rape victims, and our criminal justice system too often reflects that—not just here in Chicago but throughout the country. Survivors who do come forward are often doubted, ignored and re-traumatized. (Just read this recent article in The Daily Beast to learn how social media contributes to the problem.) The reporter seems intent on framing these barriers as being all about the victim. Instead, we’d like to talk more about how the system should be reformed. According to Kaethe Morris Hoffer, CAASE’s legal director, “Most of our clients desperately want to support the investigation and prosecution of rape. The flaw is not with survivors’ willingness to cooperate, but with the system’s ability to believe survivors and stop rape.”

This is about public safety and holding those who commit rape accountable. The reporter leaves out that side of the story—the perpetrators who are getting away with rape. Local law enforcement is making strides in creating a better response to sexual assault—training prosecutors and police about the realities of trauma so they can better work with survivors. But there is much more to be done.

CAASE strongly supports transparency in data. Using data to tell a story is a hot topic in journalism right now and rightly so. The map in RedEye shows that sexual assault is being reported in every corner of our city. Better data collection and transparency are important tools for advocates who are working to identify systemic issues facing survivors of sexual assault. CAASE participates in a sexual assault task force with allies mentioned in the story, and we are thrilled to see a rallying of support from local leaders like Alderman Scott Waguespack.

To learn more about CAASE’s legal work, please visit our website or make a donation here.

Posted by CAASE Staff at 7:41 AM No comments:

Yesterday we told you that the FBI conducted a sting to arrest 150 pimps nationwide and rescue more than 100 children from sex trafficking. Today, we have some very bad news.

Two of the children were from Illinois, and one pimp was arrested in our state. Apparently, law enforcement in several cities also used this as an opportunity to arrest and charge adult women in Illinois with prostitution. Locally, Daily Herald reports that at least 14 local women (some as young as 21) in Naperville, Aurora, Elgin, Arlington Heights and Elk Grove were charged with prostitution as part of the sting. There was no mention from the FBI or Daily Herald about any johns (buyers) being arrested.

The FBI’s main message yesterday to the media was clear: children AND adults are being exploited in the sex trade. In a press release, Ron Hosko, assistant director of the FBI’s Criminal Investigative Division said: “This operation serves as a reminder that these abhorrent crimes can happen anywhere and that the FBI remains committed to stopping this cycle of victimization and holding the criminals who profit from this exploitation accountable.”


It is abhorrent that police used this sting as a reason to arrest women in prostitution.  Research shows that the majority of women in prostitution were recruited as minors, so it’s likely that is the case for some of these women. The difference between being treated as a “child victim” and a criminal appears to be merely a difference of three or four years of age. If the intention of the FBI was to take down pimps and traffickers and stop exploitation, why did Chicagoland police feel empowered to arrest prostituted adults? Did local police even screen these adults for human trafficking?

Update 8/2/2013:  In a quick scan of arrest info released by law enforcement in three cities, 98 of the 138 arrests were of prostituted people. In Las Vegas, media reported that 41 people in prostitution were arrested there. 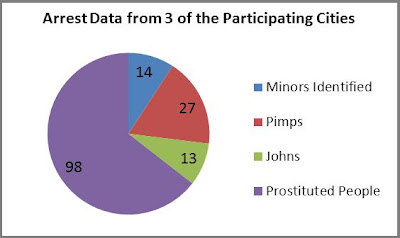 We must demand more from law enforcement. Over and over again, we see police blotters where women are arrested and johns and pimps go unmentioned. This is another glaring example of police using an easy, ingrained, and highly ineffective practice: arresting and re-arresting people in prostitution. People who buy sex in the suburbs will take great comfort in the fact that these women were arrested and that buyers were ignored. It sends a message to buyers that they are safe, immune from prosecution, and can continue doing what they do—buying sex in our community and creating the demand for more people in prostitution.

During the FBI press conference, Hosko said, “We do care, and our goal is to get these young girls into some form of treatment and help them reshape their lives and reclaim their innocence to the extent they can.” CAASE advocates that services and support should extend to anyone who has been exploited in the sex trade, including adults. It’s time for police to stop punishing the wrong people, start addressing demand, and recognize that sex traffickers also target and exploit adults.

Sign up for our action alerts here.
Posted by CAASE Staff at 10:46 AM No comments:

FBI Sting and the Local Issue of Sex Trafficking 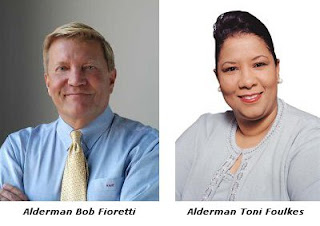 Today the FBI announced that more than 150 arrests had been made in stings targeting the sex trafficking of children throughout the United States. Two of the victims were from Chicagoland. We are so glad to see how much media attention is being paid to this today. Sadly there are many, many more minors and adults being exploited in the sex trade in Illinois.

Just this weekend, the Chicago Sun-Times ran an op-ed from Aldermen Bob Fioretti and Toni Foulkes proposing a zero-tolerance policy for sex trafficking in our city. CAASE has been partnering with Fioretti and Foulkes to address the City of Chicago’s response to sex trafficking. They recently called a City Council hearing on human trafficking, during which they heard more about local law enforcement efforts:

Cook County State’s Attorney Anita Alvarez testified that her office has brought more than 77 charges against local sex traffickers. These are local people who have been forcing local women and girls into the sex trade. Over and over, investigations are showing that most people in Chicago’s sex trade are not there by choice, but because someone has forced or coerced them into it. That, by definition, is sex trafficking.
By federal definition, all minors in the sex trade are victims of trafficking. That is also the case in Illinois (though it's not so in every state). There are many people in our community who are willing to buy sex from minors, and this demand causes the sex trade to thrive. Aldermen Fioretti and Foulkes understand the intrinsic connection. They wrote:

Maybe you think that prostitution can’t be stopped. The truth is that the people who are fueling all of this harm are going unpunished in our city. In 2011, there were only 41 charges made against pimps, buyers or traffickers in Chicago, in comparison to the more than 2,300 prostitution-related charges. The message to buyers needs to be clear: We won’t tolerate your behavior in our city.

We applaud Aldermen Fioretti and Foulkes for their leadership on this important issue and look forward to working with them to realize their vision of zero-tolerance for sex trafficking.

Our End Demand Illinois campaign is working to transform our state's response to prostitution and sex trafficking. We passed the Illinois Safe Children Act in 2010, which makes all minors in our state immune from prosecution for prostitution. To learn more about our campaign, visit www.enddemandillinois.org

Posted by CAASE Staff at 1:39 PM No comments: