AP calls Sex Trafficking of a Child a "Career" 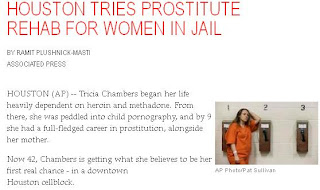 Myths about prostitution run deep in our culture. Some people believe it’s a victimless crime, or that all women in prostitution have chosen to be there. Often, the media contributes to these myths by using derogatory and shaming language. We thought, however, that it was now obvious to all that any children in prostitution should be considered victims of crime, and that adults are exploiting them in a heinous way. Apparently, the Associated Press isn’t there yet. Yesterday, reporter Ramit Plushnick-Masti filed a story about Houston’s program to “rehabilitate”people in prostitution. Here’s the intro paragraph:

Tricia Chambers began her life heavily dependent on heroin and methadone. From there, she was peddled into child pornography, and by 9 she had a full-fledged career in prostitution, alongside her mother.

A nine-year-old girl who is being sex trafficked by her mother does not have a career. Instead, adults are sexual exploiting and assaulting her. Men were buying sex from a 9-year-old girl. Nothing about that says “work” or “career” or job.

This is a giant failure by the Associated Press and Plushnick-Masti to recognize that Tricia Chambers is a survivor of childhood sexual assault. Instead, they continue to stigmatize her and others who are in a program trying to exit prostitution, by calling them “hookers” and “streetwalkers.” This is incredibly offensive and harmful, and reinforces the cultural norm that people in prostitution are to blame, when many are actually crime victims.

All of this is made even more painful because the story that Plushnick-Masti is covering needs to be told. She writes about the shift in law enforcement's response to prostitution, and the recognition that minors in the sex trade are crime victims. It's terrible that the language she chose to use doesn't reflect the story she's telling.

We need to take action. Tweet @RamitMastiAP and @AP and tell them they got it wrong. A child in prostitution is a victim of a heinous crime. They must do better in deepening reporters’ understanding of these issues and work to not re-victimize survivors of sexual assault and trafficking. The must edit this story and show that they will do more to educate reporters about the realities of sex trafficking.

Here are some sample tweets:

.@AP @RamitMastiAP call sex trafficking of children what it is—exploitation by adults, not a 9-year-old’s career. http://ow.ly/mrqLh

You can also write on the Associated Press’s Texas Facebook page: https://www.facebook.com/AssociatedPressTexas?fref=ts
Posted by CAASE Staff at 8:15 AM